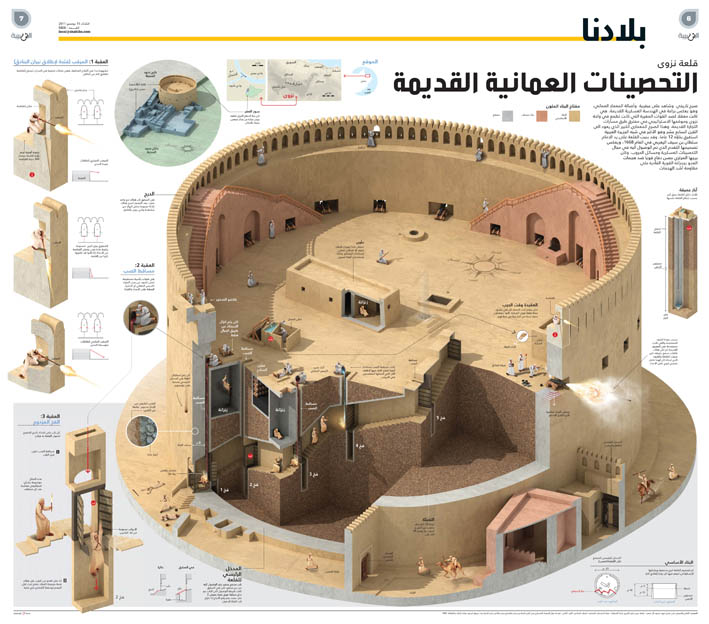 A historical edifice and a monument to Omani architectural ingenuity, Nizwa Fort reflects an ancient military engineering prowess. It was a bastion against raiding forces that had an eye on Nizwa’s oasis and its strategic location at the crossroads of ancient caravan routes.

The fort’s design reflects the advancement made in the field of military fortifications and mortar-based warfare. Its central tower was a stronghold of might against enemy attack with robust walls that could withstand fierce barrages and equipped with various obstacles.

The graphic shows the following:

1.A map showing the location of Nizwa and the different lines of defense as an ancient city with fortified wall, castle, and fort

2.A diagram showing dimensions of the fort

3.A cutaway showing the many features of the fort -- how it its architectural features were used as method of defense and offense, and with the following details:

-- Upon the gate entrance leading to the stairs, the fort’s soldiers would attack the enemies by releasing rock in the "loop hole"

-- Zigzag stairs: The line of cut was chosen in order to follow the zigzag stairs, the main defensive feature, where there are several fortified doors. Each door is supported by a "murder-hole" and a "pitfall"

-- The murder-holes were used to pour in hot substances or drop solid objects to ward off enemies, as well as to extinguish fire if the intruders would attempt to burn the doors

-- If the enemies had able to overcome the above obstacle, they will be greeted by another surprise: a pitfall covered by false-floor doors

-- There are 240 niches in the top wall that allowed snipers to shoot to enemies at various distance. Each niche has four loopholes to shoot the coming enemies at different angles.

-- There are several water wells in the fort. Without water, the defenders of the city will not be able to survive if under-sieged for a long period time. Considering the height of the floor, this deepens the well.

-- Below the high-floor, there are chambers that worked as dungeons and armory

Replies to This Discussion