Very few high street retailers and luxury designers do not include a famous face in a new season collection.  As H&M announced their latest celebrity face to endorse their collection would be American songstress Lana Del Rey, the power of celebrity endorsement has once again proven its hold on the fashion industry. Since Madonna appeared as the first celebrity on the cover of Vogue, fashion PR teams have relied on the power of celebrity endorsement to connect with and sell to the general public. Fashion houses rely on celebrity star power to generate interest and buzz around their upcoming collections. 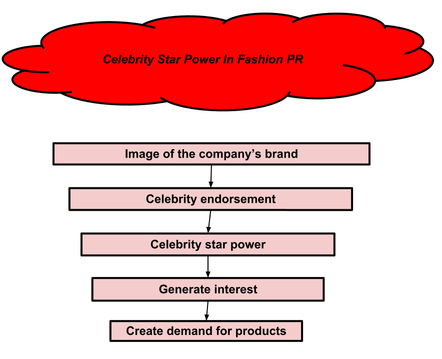 PR consultants’ will spend months negotiating deals with their desired celebrity, creating a contract that can see the celebrity be dressed in the brand for photo shoots, film premieres, award shows and television appearances. The impact celebrities can make on a brand is stronger than ever before.  Choosing the wrong celebrity can be detrimental to the overall image of the company’s brand. Their actions should reflect the values of the brand. Celebrity PR teams must work diligently to make sure their client’s public presence reflects that of the brands the celebrity represents.

Celebrity PR practitioners have seen a large growth in requests from outside the fashion industry. The success of celebrity endorsement has proven to be so successful that other industries including consumer, lifestyle, and even sport have quickly adopted it as one of the top ways to promote their brand or product. The ‘real time’ of social media outlets like Twitter and Flickr, for example, have created an outlet in which PR consultancy’s thrive in.  It’s easier now more than ever for clients to receive instant feedback from their consumer base. Online PR campaigns allow for companies to interact instantaneously with their public, building a fan base, and generating interest in the brand as a whole.

With the likes of Kate Middleton and the American First Lady, Michelle Obama, bringing attention to fashion brands in their home countries, celebrity endorsement is vital for young designers starting out in the industry. Careers have been catapulted into success from a single image captured by the press. Desire from consumers to ‘get the look’ creates a demand which often outweighs the company’s supply of the specific outfit. Similarly, beauty PR consultants rely heavily on celebrity endorsement to generate a buzz and create demand for their client’s products.

It’s been argued, however, as to how much celebrity endorsement actually influences the overall sales for a brand. While fashion PR teams can spend a large sum to contract a celebrity for endorsement, it has to be asked as to how much the company sees returned on the investment in their bottom line. Are celebrities actually persuading consumers to buy? Media relations specialists believe it depends on the target market and celebrity endorsements are centred around a younger youthful audience. These are the individuals who soak up popular culture; buying into celebrity looks and celebrity culture.  What is for certain is that it’s a tactic that has no intention of slowing down.

Katie Matthews is a freelance media analyst. She has been writing for many online publications since 2007. In her recent articles on fashion pr she shares some useful Celebrity Endorsement tips. Katie takes inspirations from www.pha-media.com while drafting her piece of articles.